Situation of Japan birds observed from the studies


The third survey of the Japan Breeding Bird Atlas program, which was started in the 1970s (first: 1974-1978) and subsequently in the 1990s (second: 1997-2002), was conducted from 2016 to 2021. 2,344 sites across Japan were surveyed with the support of 2,106 survey participants. In addition, 243,080 questionnaires were received from all over Japan. As a result, 379 species were recorded (21 of which were non-native species, introduced intentionally or unintentionally), and 278 species (plus 3 subspecies) with breeding records (or possible breeding records) in Japan, including past records, were mapped and compiled.

The species with the highest number of recorded meshes was Japanese Bush Warbler, as in the first (1970s) and the second (1990s) surveys. In the third survey in the 2010s, Large-billed Crow and Brown-eared Bulbul followed along. In Hokkaido, in contrast to the rest of Japan, Black-faced Bunting was the most common species.
The change in the number of recorded meshes over time since the 1970s shows that Meadow Bunting, which ranked second in the first survey (1970s), has dropped in rank. Five species of open habitat (Meadow Bunting, Carrion Crow, Eurasian Tree Sparrow, Grey-capped Greenfinch, and Bull-headed Shrike) were ranked in the top ten recorded in meshes in the 1970s decreased to four in the 1990s and further decreased to three in the 2010s. The abundance of forest species, on the other hand, increased.

The most numerous bird species recorded in the 2010s survey was Brown-eared Bulbul, followed by Japanese Bush Warbler and Eurasian Tree Sparrow. Surveys in the 1990s and 2010s showed a decreasing trend in the abundance of open habitat species, such as Eurasian Tree Sparrow, Barn Swallow, and White-cheeked Starling, as well as in the number of recorded meshes.

Species that have Increased

Based on the results of 1,947 comparable field survey sites, we summarized the results of the second (1990s) and the third (2010s) surveys in terms of changes in the number of recorded sites and the total abundance of individual birds. Many forest bird species, including non-native birds such as Chinese Hwamei and Red-billed Leiothrix, increased in abundance. Also, many species of summer migrants which had been concerned as declining and Large fish-eating birds such as Great Cormorant also increased.

Species that have Decreased

On the other hand, the number of recorded sites decreased for small fish-eating birds such as Little Tern and Little Egret. The total recorded numbers decreased for aerial feeders such as White-throated Needletail, Pacific Swift, and Barn Swallow, and for open habitat (including farmland) species such as Eastern Cattle Egret, Barn Swallow, White-cheeked Starling, and Eurasian Tree Sparrow.

Some of the changes in distribution during the breeding season could be attributed to the effects of the global climate change. For example, the breeding distribution of Black-faced Bunting was considered to be gradually moving northward. In Japan, it breeds mainly in northern Japan and at high altitudes in the central and western parts of the country. On the other hand, in Russia, this species is increasing its distribution toward the north, and its population is increasing. In addition, the distribution of Olive-backed Pipit was shrinking in western Japan and the lower elevation parts of the country. 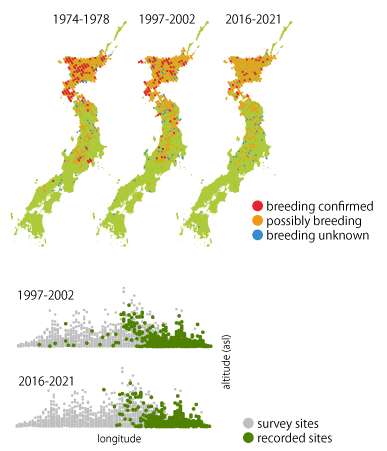 Changes in the horizontal (top) and vertical (bottom) distributions of Black-faced Bunting. Records west of central Honshu were decreasing.